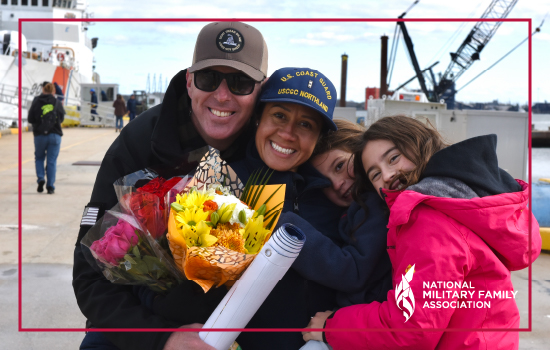 NMFA continues to lead the way as advocates for military families. In 2022 we were laser focused on military family well-being, ending military food insecurity, and enhancing financial security.

We advocated for the Healthcare Fairness for Military Families Act, a bill that would extend dependent coverage under TRICARE for children of service members up to the age of 26 at no additional cost. This important legislation would bring TRICARE in line with commercial insurance plans and support our oldest military kids’ physical health and well-being.

This fall, NMFA Chief Executive Officer Besa Pinchotti represented military families at the White House Conference on Hunger, Nutrition, and Health. Alongside three of our strongest partners in the fight to end food insecurity in our military community, we shared alarming food insecurity data and outlined policies that will put an end to this shameful problem.

The Fiscal Year 2023 National Defense Authorization Act (NDAA) includes provisions that will help the military families struggling the most. The income eligibility threshold for the Basic Needs Allowance, a targeted pay increase to support low-income military families, was increased to 150% of federal poverty guidelines from the previous cap of 130%. The bill also authorized the Secretary of Defense to increase the cap even further, to 200% of federal poverty guidelines, in certain circumstances.

These improvements will strengthen the Basic Needs Allowance, but for many military families, that relief is still out of reach. For families in need, our work continues, and we won’t stop fighting until every military family has the resources they need to thrive.

In addition to after-the-fact interventions, military spouse employment and underemployment must be turned around for our military families to have financial stability. Military spouses must often put their careers on hold because of the demands of military life — and the pandemic only made that worse.

The Military Spouse Hiring Act continued to be one of NMFA’s top legislative priorities.. The bill would add military spouses as a target group under the Work Opportunity Tax Credit, incentivizing businesses to hire them. While we were successful in garnering substantial support for the legislation in 2022, we were unable to get it included in the omnibus spending bill and will take this priority into 2023.

While we advocate for the long-term solutions military families need, we work to give our families support today.

This summer, NMFA Chief Executive Officer Besa Pinchotti traveled to Europe to join Prime Minister Albin Kurti of Kosovo in conversation about the sacrifices of American service members and their military families, including the two Apache pilots—officers David A. Gibbs and Kevin L. Reichert—who lost their lives in Albania in 1999 in support operations for the NATO intervention in Kosovo.

NMFA’s longstanding commitment to military families was also celebrated at home when NMFA was honored at the Congressional Club’s 109th First Lady’s Luncheon as the event’s charitable recipient.

NMFA was also recognized for our unparalleled work to understand the military family experience. In November, at the National Council on Family Relations (NCFR) annual conference, NMFA accepted the Military Families and Children Outstanding Proposal award.

As we enter our 54th year putting the military family voice first, advocacy remains at the core of the NMFA mission. As long as service members put on a uniform, we’ll stand behind the ones who love them.