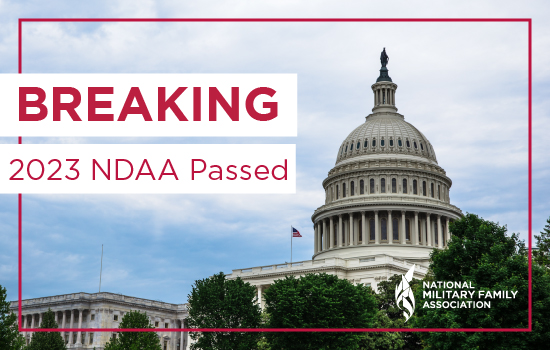 Last week the Senate passed the Fiscal Year 2023 National Defense Authorization Act (FY23 NDAA) and sent it to the President for his signature. There was some good news for military families.

Congress authorized a 4.6 percent pay raise. It is the highest pay raise in the past twenty years.

The Basic Needs Allowance (BNA), which is a targeted income boost for low-income military families, was passed in last year’s NDAA and is set to be implemented in January. Congress increased the number of families who will be eligible for the BNA by raising the income eligibility threshold to 150% of federal poverty guidelines (previously the cap was set at 130%). Congress also authorized DoD to increase the income cap to 200% of federal poverty guidelines under certain circumstances. However, we were disappointed that BAH will continue to be included when calculating eligibility for the BNA.

The bill includes a pilot program to reimburse families for child care costs incurred during PCS moves. If care is not available at the local installation CDC within 30 days following a PCS move, the pilot program will cover travel expenses for a child care provider designated by the family. The program will cover travel expenses up to $500 for CONUS moves and $1500 for OCONUS.

Congress also extended the parent fee discount to child care employees. The Services have already begun to implement this program. NMFA supports initiatives like this which incentivize providers to work at CDCs.

To enhance the services available at child development centers, Congress has authorized a pilot program to hire special needs coordinators at locations with a high concentration of EFMP-enrolled dependents. These coordinators will work to include special needs services at these facilities in addition to providing classroom support and guidance on how to work with children with special needs. The program will begin in 2024 and run for 2 years.

Congress replaced the current TRICARE Dental Program with a new plan. Starting in 2026, families will be able to choose a dental plan from up to four participating coverage carriers. Families will also have the option of choosing between standard and premium plans, depending on their needs. The DoD will continue to cover part of the premium for dental coverage, with families choosing the premium plan paying the cost difference out of pocket.

Congress authorized an open season for the Survivor Benefit Plan (SBP). NMFA has advocated for an open season since the Widow’s Tax was eliminated. We are very pleased this was included in the final bill.

There are some provisions that leave us with many questions.

We were surprised, and very happy, to see a provision that reimbursed families $500 CONUS and $1,000 OCONUS for the transportation of their pet during a PCS. However, the provision gives Service Secretaries the authority to reimburse, but does not require them to reimburse. NMFA is concerned that the Services will implement (or not) the provision differently creating an unequal benefit. NMFA will monitor and work with the Services to make sure the provision is applied equally among the Services.

For the past two years NMFA has fought against legislation and amendments that prohibited the sale of goods or services by companies that did business with the International Olympic Committee (IOC) or the Beijing Organizing Committee to the U.S. federal government. Our rationale was that eliminating popular products from commissaries and exchanges will force families to seek those items elsewhere. Military families rely on commissaries and exchanges for low-cost groceries and household items. Forcing them to shop elsewhere will increase the financial burden on families, many of whom are already struggling financially.  We agree addressing human rights abuses is an admirable goal. However, the cost of standing up to China should be borne by the nation as a whole. It is unfair to expect military families, who already serve and sacrifice, to bear the entire burden.

The FY23 NDAA includes a provision that prohibits the sale of goods produced or manufactured by forced labor in the Xinjiang Uyghur Autonomous Region (XUAR) in commissaries and exchanges. Our Association is concerned with how this would be enforced and implemented, even at this limited level. How will DoD determine what goods are using forced labor, given the limited access to data in China? What resources are devoted to ensuring received goods in the Commissaries and Exchanges are NOT from forced labor? Who (which agency/department. Specifically) will be responsible for making this assessment and enforcing this act? While we applaud the effort to address the human rights abuses in China, these questions are still a cause for concern, particularly regarding what the long-term impact will be of this legislation.

NMFA will continue to advocate on your behalf. Continue sharing your stories with us as we do.