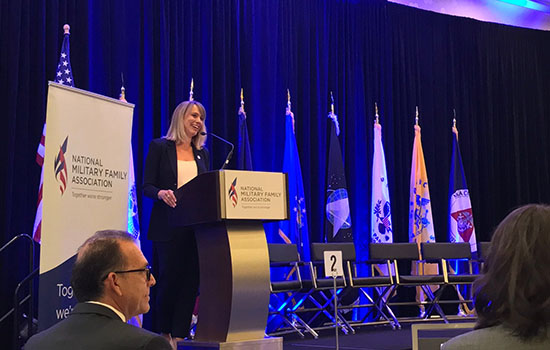 2022 State of the Military Family Summit

This morning, NMFA was pleased to present the 2022 State of the Military Family Summit in Arlington, VA. We hosted military leaders, policy makers, military family members, and those invested in military families to discuss a variety of topics including military life throughout a global pandemic, the end of a decades-long war, and especially the impact of it all on military-connected kids.

The key takeaway from this event: we need to listen to our military teens and collaborate with them to enable their successes in life.

This year, we once again partnered with Bloom: Empowering the Military Teen to learn exactly how military teens are coping. A panel of six teens eloquently shared the best and worst parts of military life, as well as what they need from adults to be successful in their educational pursuits, career aspirations and life goals.

We found out a common phrase used among military teens is, “What’s your list?” In other words, what is the list of places you’ve lived? Former NFL All-Pro and Founder of Moving Families Foundation Johnnie Johnson emphasized “the challenges and the discomforts” of frequent relocations and referenced his experience moving from the University of Texas at Austin to the LA Rams. Johnson said, “Inclusivity means being welcome, being engaged,” and his goal is to have military kids engage in activities – from debate club to sports – throughout military relocations in order to learn life lessons and establish strong friendships.

In fact, panelist and Army teen Mia Burgos gave fantastic advice to fellow military teens struggling with fitting in after yet another relocation. “Use everything you’ve learned to your benefit, get involved even if you know you’re going to leave because it’s so valuable to make those connections,” she said.

We also learned when it comes to mental health, the majority of military teens we asked are faring well, but they are not where they could be. According to Dr. Crystal Lewis, NMFA’s Director of Research and Insights, not only do we need to listen to our military teens, but also “act on their behalf.”

What bothers military teens most? Our panelists shared how fitting in is hard enough as a teen, but those experiences are “exacerbated”, especially when moving overseas, says Bloom: Empowering the Military Teen Co-Founder and Navy teen Matthew Oh. “My dad being deployed,” said Army teen Kaitlyn Gorkowski, and, from Navy teen Samantha Rough, “deployments that come out of left field”. Another challenge is the responsibility shouldered by “hidden helpers,” or those military teens who act as caregivers to military-injured parents or family members.

Deputy Assistant Secretary of Defense for Military Community and Family Policy Patty Barron – who is also the former NMFA Director of Youth Initiatives – shared her personal experiences with many of these obstacles both as a military spouse, mother and grandmother. She stated that positive change “starts with a conversation” with our military teens and, thanks to the partnership between NMFA and Bloom: Empowering the Military Teen, “now we have that information and now we have a way forward.”

Our military teen panel also shared how their lives, though unconventional, allowed them to have unmatched experiences like travel, experiencing different cultures, and, like Faith Clark, Army teen, who has fond memories of private tours “at the Pentagon on weekends with my dad.”

The Honorable Miguel Cardona, 12th US Secretary of Education echoed panelist and Air Force teen Lydia Ruffin’s statement that, as a military teen, “you serve, too.” Further, according to Secretary Cardona, military teens have served their entire lives. He referenced the Military Interstate Children’s Compact Commission and pledged continued support to the country’s military teens.

We were honored to receive a special video message from First Lady of the United States, Dr. Jill Biden, who acknowledged military teens directly: “You’re used to figuring it out, but you shouldn’t have to do it alone,” and challenged us all to create connections with military teens.

You can create those connections by learning more through The Military Teen Experience 2022 and joining us April 20, 2022 at 10am at www.facebook.com/militaryfamily where we will discuss how to empower the future force of tomorrow by supporting military teens today.