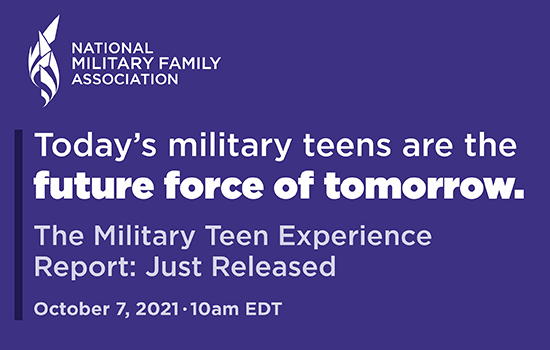 Survey of 2,000 military teens shows an overwhelming majority plan to be a part of America’s force of the future, while 42 percent show signs of emotional distress

ALEXANDRIA, VA, October 7, 2021 – Today, the National Military Family Association (NMFA), the leading nonprofit dedicated to serving families who stand behind the uniform, and Bloom: Empowering the Military Teen, an organization run by and for military teens, released data fielded from a first-of-its-kind military teen experience survey. When asked if they plan to serve in the military in the future, a stunning majority (65%) of these military kids answered yes. That’s compared to just 13% of their civilian peers, according to the Department of Defense.

The survey of over 2,000 military teens is an effort to better understand the experience of this often-overlooked and underserved part of the military community. Military teenagers between the ages of 13 and 19 responded to the NMFA + Bloom Military Teen Survey during a two-week period in May of 2021. The results brought to light that a significant 42% of military teens show signs of emotional distress. The survey also identified stressors military teens have about their basic needs, with 36% of respondents expressing concerns about food insecurity.

“Military teens serve our country every day alongside their service member parents,” said Besa Pinchotti, Executive Director and CEO of the National Military Family Association. “They move when the military tells them to—usually every two to three years. They start new schools, find their way in new communities, support their families through deployments, separations, and the unique challenges of military life. While they don’t yet wear the uniform, many of them tell us they plan to in the future. Thanks to this partnership with Bloom, we can be more focused on developing the right programs and resources for these young patriots who will, one day, protect us all.”

The survey used the Warwick-Edinburgh Mental Well-Being Scale (WEMWBS), a validated, 7-item scale that measures the well-being and psychological functioning of our military teen community ages 13 and up. The scale is structured to focus on a positive approach, and it builds on previous scales to capture a wide conception of well-being, including emotional, cognitive, and psychological components, packaged in a short-form survey teens can reliably complete. Additionally, the organizations relied on the USDA Food Security Survey for Youth Ages 12 & Older (USDA short form) to measure the food insecurity levels of military teens.

“We would like to express our immense gratitude to the National Military Family Association for their sincere willingness to amplify the voices of military teens,” said Elena Ashburn and Matthew Oh, Co-founders of Bloom: Empowering the Military Teen. “With the results of this survey, we hope to shed light on some of the struggles that we see in our resilient community every day. Military teens, many of whom will become the future fighting force of America, are ready to be heard. We hope that you are ready to listen.”

NMFA has made specific recommendations to Congress that have been included by both the U.S. House of Representative and U.S. Senate’s respective mark-ups of the National Defense Authorization Act to establish a Basic Needs Allowance for families struggling to put food on the table.

To learn more about our recommendations and download the full report, visit: https://www.militaryfamily.org/the-military-teen-experience/

The National Military Family Association is the leading nonprofit dedicated to serving the families who stand behind the uniform. Since 1969, NMFA has worked to strengthen and protect millions of families through its advocacy and programs. They provide spouse scholarships, camps for military kids, and retreats for families reconnecting after deployment and for the families of the wounded, ill, or injured. NMFA serves the families of the currently serving, veteran, retired, wounded or fallen members of the Army, Navy, Marine Corps, Air Force, Space Force, Coast Guard, and Commissioned Corps. of the USPHS and NOAA. To get involved or to learn more, visit www.MilitaryFamily.org.

About Bloom: Empowering the Military Teen

Bloom: Empowering the Military Teen is an organization run by and for military teens. It was created in April 2020, after founders Elena Ashburn and Matthew Oh both struggled with moving away from Carlisle, PA. They wanted to make sure that other military teens knew they were not alone in their struggles and could find solace in the military community. Bloom is the place military teens can find comfort and advice about everything military kid-related: from moving tips to the top things to do at your duty station.