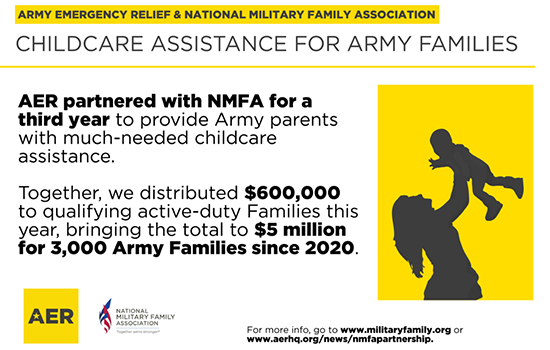 Together they distributed $600,000 to qualifying active-duty Families this year, bringing the overall total to $5 million for 3,000 Army Families since 2020.

Access to quality, affordable childcare is a nationwide issue, but for military Families it can be an even larger challenge. The normal routine of military life — moving every two to three years, deployments and extended training missions — is compounded by pre-existing childcare shortages.

Qualified Families received reimbursements up to $3,000 each for:

About AER: Created in 1942, Army Emergency Relief’s mission is to provide grants, interest-free loans and scholarships to promote readiness and relieve financial distress of Soldiers and their Families. AER has assisted 4 million Soldiers with $2 billion in the last 80 years — providing $1 billion since 9/11. Ninety cents of every dollar donated goes straight to Soldiers and Families in need. The U.S. Army’s official nonprofit earned its seventh consecutive four-star rating from Charity Navigator in 2022, putting it in the top 10 percent of American charities. To learn more, visit www.armyemergencyrelief.org

About NMFA: The National Military Family Association is the leading nonprofit dedicated to serving the families who stand behind the uniform. Since 1969, NMFA has worked to strengthen and protect millions of families through its advocacy and programs.They provide spouse scholarships, camps for military kids, and retreats for families reconnecting after deployment and for the families of the wounded, ill, or injured. NMFA serves the families of the currently serving, veteran, retired, wounded or fallen members of the Army, Navy, Marine Corps, Air Force, Space Force, Coast Guard and Commissioned Corps of the USPHS and NOAA. To get involved or to learn more, visit www.MilitaryFamily.org.