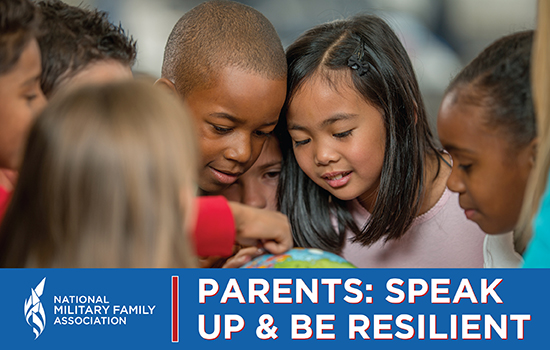 How to Be Your Military Child’s Best Education Advocate? Speak Up and Be Resilient

How to Be Your Military Child’s Best Education Advocate? Speak Up and Be Resilient

Every summer, military children around the world prepare to move—again. On average, military kids will attend as many as six-to-nine schools by the time they finish high school. That’s three times more often than their civilian peers. This cycle of constant transition can upend, disrupt, and compromise their education, making an already challenging move even more difficult.

As a parent, advocating for your child’s education is more important than ever. But as many military families know, navigating the academic obstacles caused by frequent relocations can be tricky. At NMFA, we want to equip you with the resources, tools, and information you need to be an effective advocate for your military kid. We have a toolkit here that can help you navigate your child’s school transitions, but we know how important it is to not just be told how to do a thing — but to hear from other parents, just like you, who have done it themselves.

That’s why we’ve compiled the stories of parents, educators, and advocates for equal education to help make your child’s next school transition as smooth as possible.

The Role of Resilience

Resiliency is a hallmark of military kids, but its meaning is often misconstrued. “Resilience” has become a misnomer to describe military kids’ unwavering strength and perseverance in the face of hardship and transition— reducing it to mere “grit.” Resilience is bigger than that, and it requires investment.

So, what is resilience? “It’s an umbrella term that covers the everyday skills and strategies that allow us to navigate life,” Kelly Clark, a current military spouse, parent, and educator, explained. Skills like communication, goal setting, emotional regulation, and stress and anger management are essential to a successful school transition.

Kelly said she first noticed the need for resilience skills and strategies in her 4th and 5th grade classrooms. “My biggest role with [students] at times wasn’t multiplication tables but learning about the deficits they had. I realized a lot of what I was doing was that—strategies.”

Over the course of her career, Kelly devoted herself to identifying deficits and transforming them into benefits with resiliency tools, the latest of which is an online course set to release in August 2022 called Reframing Resilience. “I wanted to create the start of something that would begin to unravel what resiliency really is,” Kelly shared. “I realized I needed to reframe resilience. It’s not the answer for everything, but it’s a positive and productive way forward. Once [people] know what resources are available to them, they become their own advocate.”

Becoming your own best advocate — or your kid’s best advocate — is exactly what we try to help military families do. But we know it isn’t easy, and it doesn’t come naturally for everyone.

Advocating For Your Military Kids Overseas

While resilience is certainly an important tool to cope with adversity, resiliency isn’t meant to be a long-term coping strategy. PCSing overseas has its own set of challenges that can prove especially difficult for even the most “resilient” military families and children.

While most military-connected kids stationed stateside are educated in local public school systems, many who are stationed overseas opt to attend Department of Defense Education Activity (DoDEA) schools. Of the nearly 900,000 military-connected children worldwide, more than 66,000 are enrolled in DoDEA schools and served by more than 8,000 educators. DoDEA operates 166 accredited schools in 8 districts located in 11 foreign countries, 7 states, Guam, and Puerto Rico. Its mission: “to educate, engage, and empower military-connected students to succeed in a dynamic world.”

But no school system is perfect, and that’s where parent advocacy comes in. Several parents of military students overseas shared their experiences as they tried to find ways to effectively advocate for their military-connected kids and creatively elevate other parents’ voices within DoDEA.

Advocating for your kids at a school unaffiliated with the military may seem an easier task than standing up for your kid with DoDEA, but it’s no less important.

“Being a voice for our children is critical for all parents. Many of us find that voice the day our babies are born whether our children have special needs or not. Education within DoDEA and then special education is a whole different level of finding our voices,” Carolyn Pickering, a civilian spouse and mother of two, stressed.

Since moving to Korea, both Carolyn’s children were diagnosed with educational needs—one with a 504 Plan and one with an Individualized Education Plan (IEP). While the child’s needs on the 504 Plan have been consistently met, the child’s needs on the IEP have not been met consistently. Any parent with a 504 or an IEP can attest to how much work goes into the successfully building, socializing, planning, and executing of those documents, and it’s exhausting.

Carolyn shared her experience navigating an IEP that she says was out of compliance on many occasions during a three-year period. With lessons learned the hard way, proactive advocacy on her part, and support, Carolyn’s child is currently receiving consistent IEP services and she plans to remain vigilant as her child heads to middle school next year.

Jetta Allen, a certified special education teacher and active-duty Army spouse, has a son in the fifth grade who has an IEP for autism, speech impairment, and ADHD. He wasn’t fully diagnosed until age two after being denied help during a PCS. “I knew something was wrong and no one would help me,” Jetta said. “That just fueled me to be his best advocate.”

When her family moved to Camp Humphreys, South Korea, her son was “flailing.” The school didn’t know his schedule of services or accommodations, and wrongly assigned his classwork. She told us that despite his documentation as a gifted student, there was a lack of access to programming for which he was eligible that she attributed to his autism.

Determined to meet her child’s needs and be his best advocate, Jetta started writing the IEP herself with the regional IEP team in order to find the help she needed and expertise to craft  a comprehensive plan that would actually meet his needs.

Soon after, Jetta tried to participate in a focus group panel that turned out to be individual, closed parent interviews, after which she met Carolyn and other parents of children with special needs. 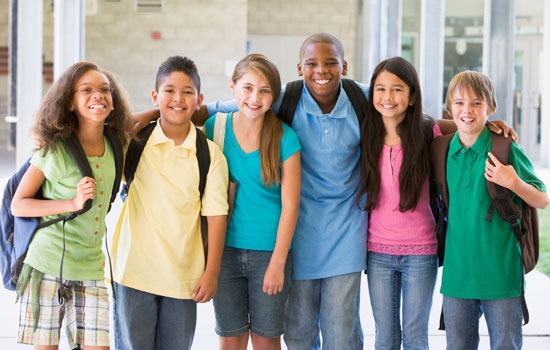 NMFA started much the same way — military spouses gathering around a kitchen table, determined to be better by their friends and community as the Vietnam war raged on. Sometimes, finding a group of people as committed to addressing a shared problem as you are can help you get the support you need to take your advocacy to the next level.

Jetta responded by creating the Humphreys Diverse Abilities Support Group, a parent and volunteer-driven organization that aims to “support, shape, and create a sense of inclusion for families and individuals with a disability, impairment, and/or need in the military community within South Korea.”

Their community is virtual, with a private Facebook group 553 members strong that provides a safe space for connectedness, education, and advocacy. Jetta and Carolyn both serve as group administrators and share information and resources to promote parent advocacy.

“Better families equal a better community,” Jetta asserted. “Better communities equal increased resiliency, readiness, and builds for the future. Increased support for families has a direct, positive correlation to an increased quality of life, decrease in stress, decrease in compassionate reassignment, and decrease in strained services such as Behavioral Health, ASAP, SUDCC, FAP, MFLC, and EFMP. It positively impacts the overall success of the military’s mission to protect its force.”

This is true beyond the realm of special education. Kim Day, a military spouse, parent, and former elementary and middle school teacher, believes that parent partnership is crucial to any flourishing school system. “The number one factor of good schools is parent involvement,” she explained.

Making Your Voice Heard – Even When It’s Hard

No matter where your kids are in school, it can be hard to know how to speak up. Most stateside public schools rely on a Parent-Teacher Association or Parent-Teacher Organization to empower parents, teachers, and administrators to communicate together in the students’ best interest. These systems are never perfect, but moving into OCONUS DoDEA schools can make that conversation funnel seem even more confusing.

Every DoDEA school should have an active School Advisory Committee (SAC) that advises the principal. SAC concerns may be voiced one of two ways, depending on the where the possible resolution lies: The first is the Installation Advisory Committee (IAC) which advises the Garrison Commander at the local level. The second is the District Advisory Council (DAC) which goes to the Superintendent. DAC issues may then be brought to the Regional Advisory Council (RAC) to the Director of Student Excellence. Concerns may or may not finally reach DoDEA Headquarters through the next forum, the Dependent Education Council (DEC). If that sounds confusing to you, you’re not alone. Like a long game of telephone, this extensive channel of checkpoints often makes it difficult for parents to feel like their perspectives have been heard or addressed, particularly in spaces where their feedback can be recognized and policies and change can actually be enacted.

The School Advisory Committee is an important outlet for parents to share their concerns, but when Carolyn went to the websites of DoDEA schools worldwide in February 2022, less than 1% list School Advisory Committee representatives by name on their websites and less than 12% advertise their meeting dates and times on their websites. That makes it very hard for parents — particularly new ones — to know how to get involved or make their voices heard.

Her advice to a parent navigating DoDEA schools overseas: find and use the School Advisory Committee.  If your school does not cite that information on its website, the school office should be able to connect you with information about meetings and how to connect with the School Advisory Committee. “That’s your place to affect change in the schools,” she shared. Kim also stressed the importance of meeting your child’s teacher and going to every parent teacher conference you can.

You can also contact your School Liaison Officer (SLO). SLOs serve as the primary contact for families with pre-K-12 students and provide resources on a range of issues including special education and special needs. You can locate your SLO through Military OneSource.

“To me, advocacy is caring, not complaining. If everybody has a voice in this, everybody will be supported,” she said. “We’re better together.” 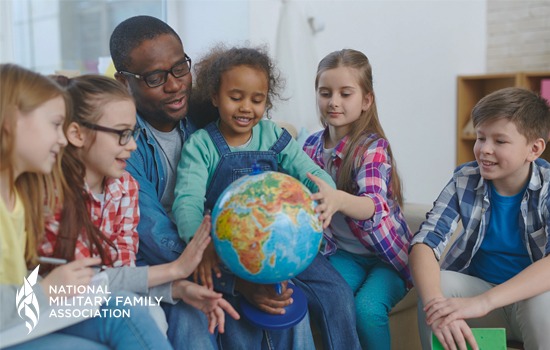 Their Right, Our Fight

Parents, we want to empower you to be your military child’s best education advocate. Education is their right, but it’s our fight to make sure our nation’s military kids succeed.

“Advocacy is a need-to-do, not a nice-to-do,” Carolyn stated. “You have to stay vigilant.”

Your voice matters, parents, and your advocacy benefits not just your kid, but all the other kids who come after.

If you’re looking for a place to start, join our Education Revolution and the #BattleForBetterStandards for step-by-step tools and resources to get battle-ready. Together, we can advocate for our military children to receive the education they deserve.