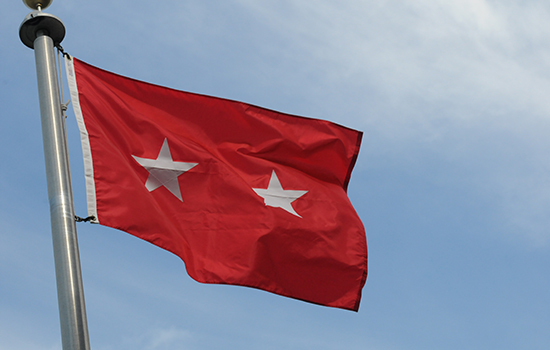 The donation will fund programming that improves the well-being of service members and their families.

William C. Holm, who was raised in a military family, passed away in November 2021 after a lifetime of service to others.

The $200,000 gift to NMFA was made in memory of their father, the late Major General George P. Holm, U.S. Army (Ret.), who enlisted in the U.S. Army in 1937 and went on to receive the Distinguished Service Medal and the Presidential Management Improvement Certificate. Major General Holm was also a recipient of the Legion of Merit with two oak leaf clusters—a medal conferred on officers and enlisted service members “who shall have distinguished themselves by exceptionally meritorious conduct in the performance of outstanding services.”

After his retirement, Major General Holm continued his legacy of service by supporting his fellow military comrades.

“Our father was a tireless supporter of veterans affairs. As an individual who dedicated his life to serving his country and supporting his soldiers, I believe that he would be pleased and proud to support NMFA’s mission of assisting military families.” said son John Holm as he reflected on the reason NMFA was chosen to receive the donation.

“Military families, like the Holms, are the backbone of our country. We know children with military-connected parents are often inspired to continue that legacy,” said Besa Pinchotti, Chief Executive Officer of the National Military Family Association. “John and William are incredible examples of the way veterans and families answer the call to serve, long after their military service ends.”

“I believe [William] would consider being able to support the mission of NMFA with this gift a dream come true,” John Holm shared about his brother.

The William C. Holm Revocable Trust’s gift to NMFA will pay forward the Holm family’s shared commitment to the military, veterans, and their families.

The National Military Family Association is the leading nonprofit dedicated to serving the families who stand behind the uniform. Since 1969, NMFA has worked to strengthen and protect millions of families through its advocacy and programs. They provide spouse scholarships, camps for military kids, and retreats for families reconnecting after deployment and for the families of the wounded, ill, or injured. NMFA serves the families of the currently serving, veteran, retired, wounded, and fallen members of the Army, Navy, Marine Corps, Air Force, Space Force, Coast Guard and Commissioned Corps of the USPHS and NOAA. To get involved or to learn more, visit www.MilitaryFamily.org.