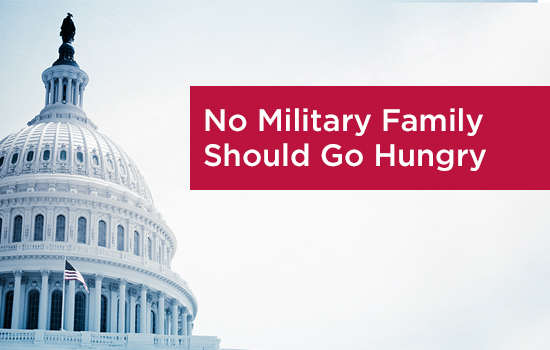 Washington, DC (Dec. 11, 2020) — Earlier today, Congress passed the National Defense Authorization Act (NDAA) for fiscal year 2021, which did not include the proposed Military Family Basic Needs Allowance, a vital change to help battle hunger and food insecurity in the military. MAZON: A Jewish Response to Hunger and the National Military Family Association (NMFA) led a national campaign urging support for this bipartisan provision, which would have provided a targeted and temporary allowance for low-income military families to boost their modest pay, so they could reliably put food on the table. Over 100 local, state, and national groups joined MAZON in urging Congress to adopt this provision in the final NDAA.

Lost in the coverage around President Trump’s threat to veto this bipartisan bill, that has passed both chambers with overwhelming support, is that Congress and this Administration have once again overlooked the needs of struggling military families. In response to the news of the failure to include the Allowance in the NDAA passed by the U.S. House and Senate, Abby J. Leibman, MAZON’s President & CEO, issued the following statement:

“Congress’ failure to include the Military Family Basic Needs Allowance in this year’s NDAA is a shameful testament to how expendable struggling military families are to some of our nation’s leaders. Even as COVID-19 is intensifying economic distress and resulting hunger and food insecurity nationwide, including many serving in the military, Congress and the current Administration continue to inexplicably ignore this crisis.

It is imperative that the incoming Biden-Harris Administration take concrete action to address military hunger, particularly since Congress has demonstrated that it is unwilling or incapable of doing so. Our leaders must make it a top priority to remove existing bureaucratic barriers that prevent access to federal food assistance programs like SNAP (formerly food stamps). We cannot allow those who serve and protect our country to continue to go hungry.”

“No military family should go hungry, but thousands are. Every day, our troops continue to serve our nation while Congress ignores their families’ most basic needs. These service members, often excluded from food stamps and the safety net programs that could keep their families fed, are forced to turn to the food pantries on or near every U.S. military installation just to put food on the table. While one in ten Americans are now food insecure, the pre-existing crisis for military families is only getting worse. Meanwhile, Congress has once again passed on the opportunity to take action.

We can no longer ignore this issue — and these families. The same leaders empowered to send our service members into battle must take whatever action necessary to ensure that no military family goes hungry again.”

Additionally, both MAZON and NMFA want to thank Congresswoman Susan Davis (CA-53) for her tireless commitment to advancing anti-hunger policies that address the acute needs of military families. Over nearly two decades in the U.S. House of Representatives, Rep. Davis was a champion in the fight against hunger and we’re proud to have had her in our corner in reforming the provisions of the NDAA.

About MAZON: A Jewish Response to Hunger:

Inspired by Jewish values and ideals, MAZON is a national advocacy organization working to end hunger among people of all faiths and backgrounds in the United States and Israel. For more information on MAZON, please visit mazon.org.

About the National Military Family Association:

The National Military Family Association is the leading nonprofit dedicated to serving the families who stand behind the uniform. Since 1969, NMFA has worked to strengthen and protect millions of families through its advocacy and programs. We provide spouse scholarships, camps for military kids, and retreats for families reconnecting after deployment and for the families of the wounded, ill, or injured. NMFA serves the families of the currently serving, retired, wounded, or fallen members of the Army, Navy, Marine Corps, Air Force, Space Force, Coast Guard, Commissioned Corps of the USPHS and NOAA.