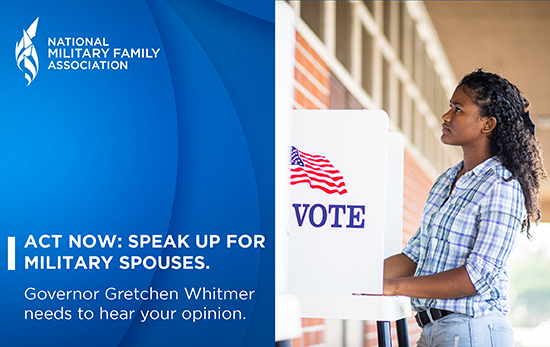 Last week the Michigan Legislature passed the Uniformed Service Member Absentee Ballot Act, which aims to ease the voting process for those serving in the U.S. military. This bill allows eligible members of the military to use U.S. Department of Defense (DoD)-verified electronic signatures while submitting their absentee ballot for state and local elections, to verify the identity of the eligible member.

While we commend the Michigan Legislature for attempting to ease the voting process for military service members, we are alarmed that the bill requires service members to use DoD-verified electronic signatures and does not extend electronic ballot submission to military spouses or eligible dependents.

Further, when military service members are stationed abroad or relocate to an out-of-state installation, many are accompanied by their families. Defining “eligible members” as only members of the military on active duty or members of the merchant marine while omitting spouses and dependents will create a ballot submission disparity within military family units.

By omitting military spouses and their dependents, the Michigan Legislature also failed to follow Congress’s intention to ease voting requirements for service members and their families. For example, military spouses and dependents are included under the eligibility definition in the the 1986 Uniformed and Overseas Citizens Absentee Voting Act (UOCAVA) which provides protections to certain groups of citizens to register, like military service members and their families, and vote absentee in Federal elections.

While this legislation may ease voting requirements for some service members, and Michigan may join the 31 other states who already allow for electronic ballot submission – this legislation, if signed, will make Michigan the only state omitting military spouses and their dependents from the eligibility definition.

Voting in U.S. elections is a fundamental right for every U.S. citizen. According to the DoD, 50% of active duty service members are married and 92% of active duty spouses are women. Omitting spouses from this legislation disproportionately cuts women out of the local electoral process.

We are extremely concerned about both the constitutionality and legal implications of  this legislation if it is allowed to move forward as-is. Our organizations would support a bill in line with the other 31 states that include military spouses and eligible dependents. We are open to discussing our concerns with you directly.