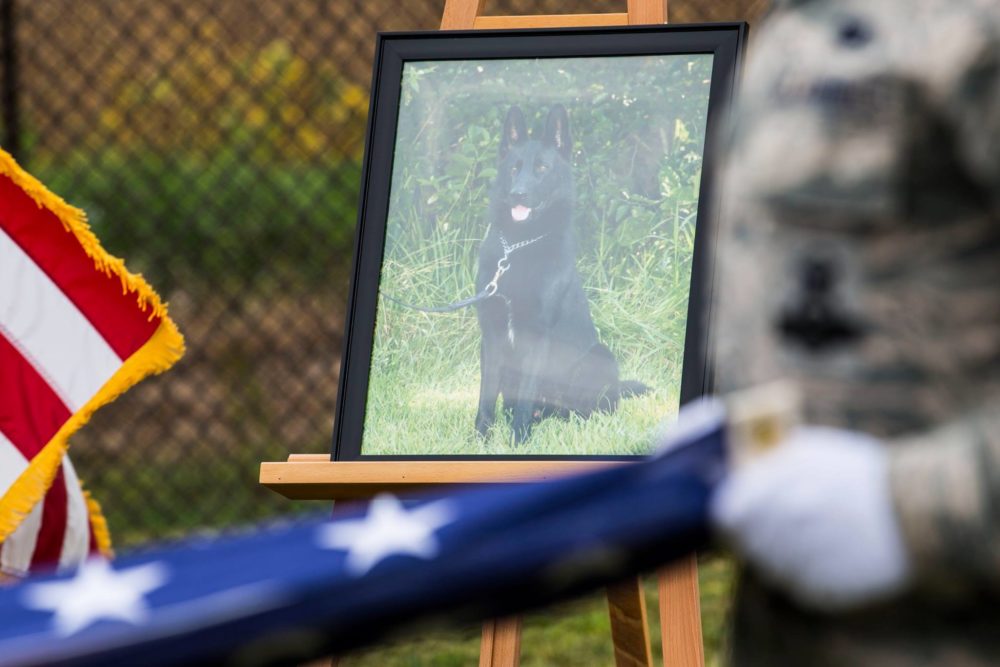 They serve and protect just like their fellow service men and women. They train, deploy, and get the bad guys.' They just so happen to have four legs and an affinity for chasing squirrels. At the start of World War I, the United States had no military working dog programs. But that all changed after the attack on Pearl Harbor. Shortly after, on November 8, 1942, the 3rd Battalion, 30th Infantry, 3d Division received dogs that they quickly trained and took out into battle for sentry (patrol) duty, and were praised with being far more alert and responsive then their handlers.

Since then, working dogs have become important parts of military defense tactics, and they not only make an impact in the field, but in the hearts of those who work with them. Grab your tissue and let these furry battle buddies melt your heart.

Like Kay, a brand new military working dog for the 341st Security Forces Squadron. He's at puppy Basic Training in Montana, where he'll receive initial training before he goes to his first duty station.

And K9 Camo, who just looooooves her handler.

This fearless K9, who's practicing hoist trainings into a UH-60 Blackhawk medical helicopter while assigned with the 131st Military Working Dog Detachment in Ansbach, Germany. Ummmwhat?!

Thanks to Taya, a military working dog with the 332nd Expeditionary Security Forces Squadron, and her handler, you can sleep easy—they've got your back at all hours.

We're pretty sure this is the cutest Marine we've ever seen. Shadow's handler isn't bad, either.

Patti served during Operation Iraqi Freedom as a combat tracking dog. She suffered grave injuries, and after more than six months of rehab, retired from duty. She received an award from the US War Dogs Association.

And if you really want to feel all the feels, meet Rico, a military working dog assigned to the 436th Security Forces Squadron.

He served in Afghanistan, earning the bronze star for selfless service. He and his handler detected more than 100 pounds of explosive material on more than 100 combat missions over four months in 2013. Rico even supported several Secret Service missions before retiring after eight years of military service.

Rico had been suffering from canine degenerative myelopathy, a progressive disease of the spinal cord, and received a hero's goodbye as his loved ones laid him to rest in January 2018 at Dover Air Force Base. Rico's owner (and last handler) carried him into the Veterinary Treatment Facility as an honor guardsman played “Taps.” Shortly after, the end of Rico's watch was called over the base radio system.

Dogs, like Rico and the others, serve just like their brothers and sisters in arms. They live their lives to protect and defend our country. And they pay the ultimate sacrifice when needed. We sure don't deserve them, do we?