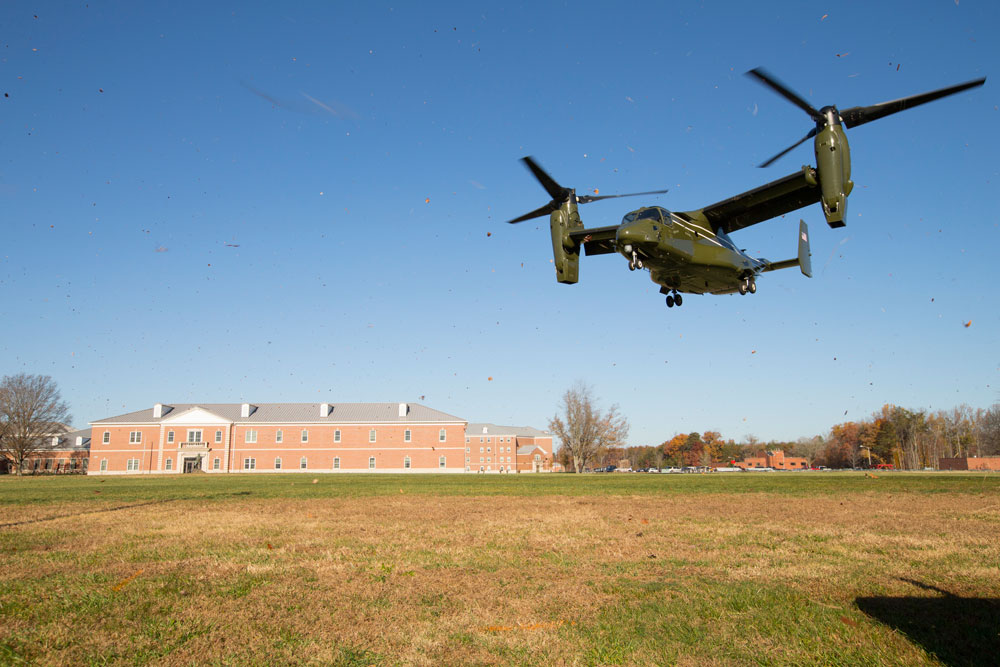 Chances are, if you have a service member in the Marine Corps, you've heard of Quantico, Virginia. Nestled on the I-95 corridor just 40 miles south of Washington, DC, Marine Corps Base Quantico is home to some pretty awesome stuff—like the Marine Corps Officer Candidate School and The Basic School, the FBI Academy, the Naval Criminal Investigative Service (NCIS), and Marine Helicopter Squadron One—or as we know it, Marine One, the President's helicopter.

Approximately 4,000 military service members and their families live aboard MCB Quantico, which also has its own elementary and middle/high school. And a little fun fact, the town of Quantico, Virginia is only reachable after going through military security—that's because it's technically surrounded by MCB Quantico on three sides, and the Potomac River on the fourth side.

So you're getting orders to Quantico (as most call it), what now? Here are a few things I learned during my stay:

There's usually a waitlist for housing. With only 355 units available for officers, and a little over 780 units for enlisted families, the chances that you'll end up on a wait list for on-base housing are high. If you're lucky enough to land a place on base, count on pristine neighborhoods that look like a scene from a Colonial postcard. American flags fly proudly, and stoops are usually littered with moms watching kids up and down the sidewalks. If you find yourself moving in, you'll definitely enjoy the small-town feel.

Living off base requires some research. I'd recommend starting your search just north of the base, in the areas of Montclair, Southbridge, or Lake Ridge. These are more suburban areas within Prince William County. There are some spotty areas with higher crime, but for the most part, it's an easily accessible, affordable area. If schools are a concern for your kids, I'd suggest looking south of Quantico in Garrisonville, Stafford, or even as far south as Fredericksburg. Stafford and Spotsylvania Counties both boast great school systems. If your budget allows it, some military families will find themselves even closer to Washington DC, in areas like Lorton and Springfield—where you may meet fellow military families who are stationed at Fort Belvoir.

On-base amenities are pretty great! Whether you're going to the commissary, the MTF, or the gym, you'll be pleasantly surprised how awesome everything is. The commissary is easily accessible near the south gate, so it's convenient for those who live off-base, and the MTF is a fairly new, well-equipped facility. The gym is 57,000 square feet complete with group exercise rooms, a spin studio, tons of weights and machines, and has a TV and Wi-Fi lounge, smoothie bar, child care, and saunas. Outside the gym is a full track and field stadium, where many units participate in recreational team sports, like flag football, kickball, and soccer.

It's a history nerd's playground. One thing I wish I would have taken advantage of more in my time living in Northern Virginia was the history around me. Of course, you're near the nation's capital, but you're also within driving distance to some of America's other amazing pieces of history, like the Manassas National Battlefield Park (in Manassas), the American Civil War Museum (in Richmond), George Washington's home, Mount Vernon, and the National Museum of the Marine Corps (in Quantico). As a suggestion, try to get to the Marine Corps 8th & I Barracks—known as the “Oldest Post of the Corps,” and home of the Marine Corps Commandant, for The Evening Parade. You won't regret it.

Traffic is a necessary evil. There really is no way to avoid traffic when you're in the Northern Virginia/Washington DC area. The trick is to assume the worst. Every morning, I-95 northbound traffic will be horrible—the stuff of nightmares. Most people who live in Northern Virginia and work in DC will commute via bus, train, even carpools to avoid the traffic. Others (like me) will leave VERY early in the morning to make the commute a little less wretched. Count on weekends to be messy on the highways, too. Everyone likes to get out of the city and head south on Friday afternoons, and then return back on Sunday afternoon/evening. Load another movie on the kids' iPad. They'll need it. So will your sanity.

MCB Quantico is small-town base located in big city area. There's so much to take advantage of both on and off-base, you'll feel like you'll won't have enough time to see it all. Don't forget to check out the food and businesses in the town of Quantico (lovingly called 'Q-Town'). The architecture on base is beautiful, the sunsets on the Potomac are one-of-a-kind, and there's nothing more memorable to make your heart bleed red, white, and blue than seeing the President's helicopter flying overhead.

Have you been stationed at MCB Quantico? What would you tell a fellow military family who's moving there?