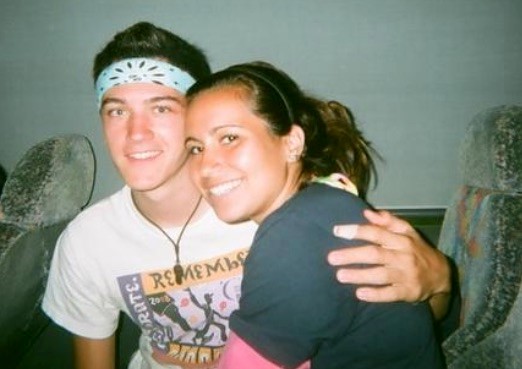 As a kid, I was somewhat unaware of the emotional impact that comes with an active duty loved one being deployed overseas and the effect it can have on a family as a whole. That changed when my stepdad was deployed to Iraq and I witnessed the shift in our family’s dynamic. The constant worry and uncertainty took its toll on my mother, who decided to become heavily involved with our local Family Readiness Group. Through that group, she discovered an opportunity for me in 2008 for Operation Purple Camp.

I was always a shy kid with a backstage type personality, so the idea of traveling to Florida to spend weeks of the summer with people I’d never met was a little nerve wracking. However, after forming a circle outside on day one and meeting Mr. Mucci (the camp director) along with some of the people I’d be camping with, hearing the activities we’d take part in, and more importantly the purpose of the camp, I was all in.

The initial camp was intended for older teens to take part in team building exercises and leadership development in order to potentially be involved as mentors for the younger kids that were set to arrive in the following week for Operation Purple Camp. In that first week of mentor camp, we tested out some fun activities that would be used during camp and I was amazed at how engaged and involved I was, being that I usually feel more comfortable in the background. However, being able to build connections with kids my age who had gone, or were currently going through the same family situations helped validate my feelings about military life and how to cope with those feelings.

After the counselor camp, I was asked to come back as a mentor for Operation Purple Camp and was thrilled for the opportunity. Having already experienced a sample of what was being offered by this program, I was eager to guide and support younger kids going through similar situations, and what an experience it was.

We traveled to several Florida State Parks by bus, and even had the chance to kayak to a river camp! The team building exercises (scavenger hunts, human pyramids, hiking navigations, building fires, and setting up campsites) brought us all closer together and gave each of us an insight as to what we were capable of, personally. Towards the end of camp, I felt like I had finally broken out of a shell that was keeping me from being the best version of myself. On the last day of camp we were given notebooks to be used as a yearbook where fellow campers could write their information down and little mementos about their experiences during the camp. Saying goodbye to such an awesome experience was bittersweet, as I couldn’t wait to tell my family what I’d been up to.

Fast forward almost 11 years to my adult life. I currently work as a logistics specialist for a tech start up in Birmingham, Alabama. One day while cleaning and organizing my apartment, I came across a notebook that looked familiar. As I opened it up to see whether or not it was worth keeping, I started flipping through decade old pages of notes from fellow Operation Purple campers. I starting tearing up as memories flooded back to me. I read what others had written about the change they saw in me over the course of the camp in terms of leadership and initiative, and I started to recall how empowered and connected I felt during my time there.

Since camp, I’ve been through some difficult personal and family situations, and I honestly believe the leadership and interpersonal skills I developed at Operation Purple Camp helped me mature into the person I am today. I will forever cherish those memories and I am overjoyed to see the growth this program has accomplished since my time there. Finding those notebooks reminded me of the importance in maintaining these opportunities for the youth of America’s military families, as these camps provide a wholesome experience that promote positive impacts not only for the kids involved, but the families they belong to, as well.

If your military kid needs a fun (and free!) summer activity, Operation Purple Camps are now accepting applications for military kids to attend the 2019 camps around the country!

Operation Purple Camps are fully funded by donations from supporters who care about our nation's military kids. Please consider a tax-deductible donation to help give other military children the life-changing chance to spend a summer at Operation Purple Camp. The memories really do last a lifetime.