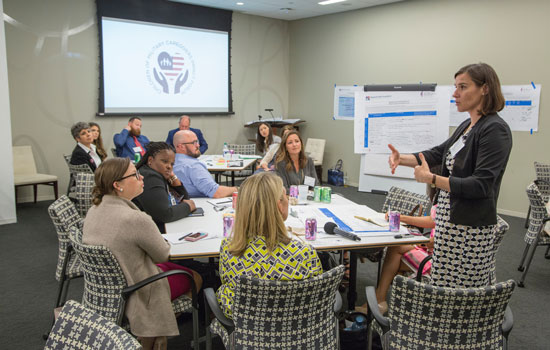 Washington, DC—The National Military Family Association (NMFA), a nonprofit that works to strengthen military families, and the Elizabeth Dole Foundation (EDF), an organization that empowers, supports, and honors our nation’s military caregivers, today hosted a forum focused on the children of caregivers. Participants worked together to gain a better understanding of the challenges faced by these children and produce a shared action plan that will serve as the basis for future programming and support.

An estimated 5.5 million Americans act as military or veteran caregivers. According to a 2014 RAND Corporation study, these caregivers face increased levels of depression, anxiety, isolation, family strain, and financial and legal troubles.  Advocates worry these negative outcomes of caregiving are being passed on to children in the home.

“A generation of children has witnessed first-hand the physical and emotional effects of war,” said Senator Elizabeth Dole. “Like their caregiver moms and dads, these children are proud to be part of their military family, but the load they carry is heavier than any our nation should let them bear.”

Today’s discussion resulted in a unanimous commitment to:

NMFA Executive Director Joyce Raezer had this to say about the newly drawn path to focus on these young heroes, who are too often unnoticed: “These children have given so much of themselves. It feels good to create a way forward with this group of organizations who cares about their sacrifices and is dedicated to making them a priority.”

In the coming weeks NMFA and EDF will compose a strategic plan based on today’s input and disseminate it to forum participants for their comment. Participants will also be asked to pledge their support in carrying out the plan and fulfilling the forum’s goals.

About the National Military Family Association

The National Military Family Association is the leading nonprofit dedicated to serving the families who stand behind the uniform. Since 1969, NMFA has worked to strengthen and protect millions of families through its advocacy and programs. They provide spouse scholarships, camps for military kids, and retreats for families reconnecting after deployment and for the families of the wounded, ill, or injured. NMFA serves the families of the currently serving, veteran, retired, wounded or fallen members of the Army, Navy, Marine Corps, Air Force, Coast Guard, and Commissioned Corps of the USPHS and NOAA. To get involved or to learn more, visit www.MilitaryFamily.org.

The Elizabeth Dole Foundation is the preeminent organization empowering, supporting, and honoring our nation’s 5.5 million military caregivers – the spouses, parents, family members, and friends who care for America’s wounded, ill or injured veterans at home. Founded by Senator Elizabeth Dole in 2012, the Foundation adopts a comprehensive approach in its support and advocacy, working with leaders in the public, private, nonprofit, and faith communities to recognize military caregivers’ service and promote their well-being. Learn more about the Elizabeth Dole Foundation at www.elizabethdolefoundation.org.