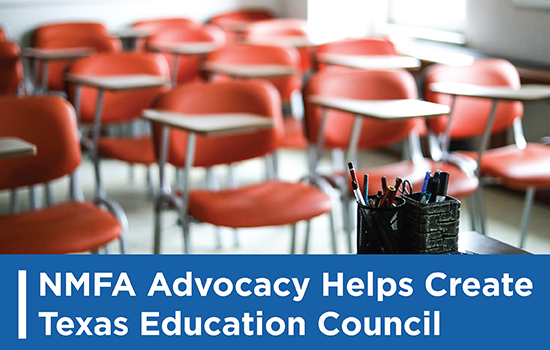 Texas-based military families can count on the new State Advisory Council to support their children in their schools.

The National Military Family Association (NMFA) advocates for military children’s access to high-quality education across the world, so when legislation came up this year in Texas that could help make that possible, we didn’t shy away.

Texas bill HB 3932 establishes the State Advisory Council on Educational Opportunity for Military Children and will be implemented on September 1, 2021. As an ex-officio member of the Military Interstate Children’s Compact Commission, NMFA has led the charge to eliminate roadblocks for military kids as they transition from one school to the next.

This kind of support is particularly important for military children, who are regularly uprooted from one school to the next as their families make military-mandated moves. The average military child attends six to nine schools between kindergarten and high school graduation. To help mitigate those difficulties, the previously-instituted Interstate Compact on Educational Opportunity for Military Children (the Compact) levels the playing field for military kids in all 50 states and the District of Columbia, supporting their transition into new school districts so that they have the same opportunities as their peers. The Compact ensures that military kids are immediately enrolled in school after a move, placed in the appropriate academic program, and able to graduate on time.

Despite being adopted by all 50 states and D.C., the Compact doesn’t work on its own – it relies on states to stand up various supports to take the Compact from intent to action. One of the most important provisions of the Compact is the creation of a State Advisory Council. These Councils are supposed to provide state leadership with guidance on education-related issues affecting military families and make sure school districts are implementing all the provisions of the Compact. This wasn’t the case in Texas, however, where the law establishing the Compact did not include a State Advisory Council.

Now, thanks to the hard work of advocates at NMFA and the Military Child Education Coalition, Texas HB 3932 was passed in June and families can count on their new State Advisory Council to support military-connected children in their Texas schools.

We want to hear from you! If you have concerns about education standards or school transitions for your military kid, we can help. Share Your Story.