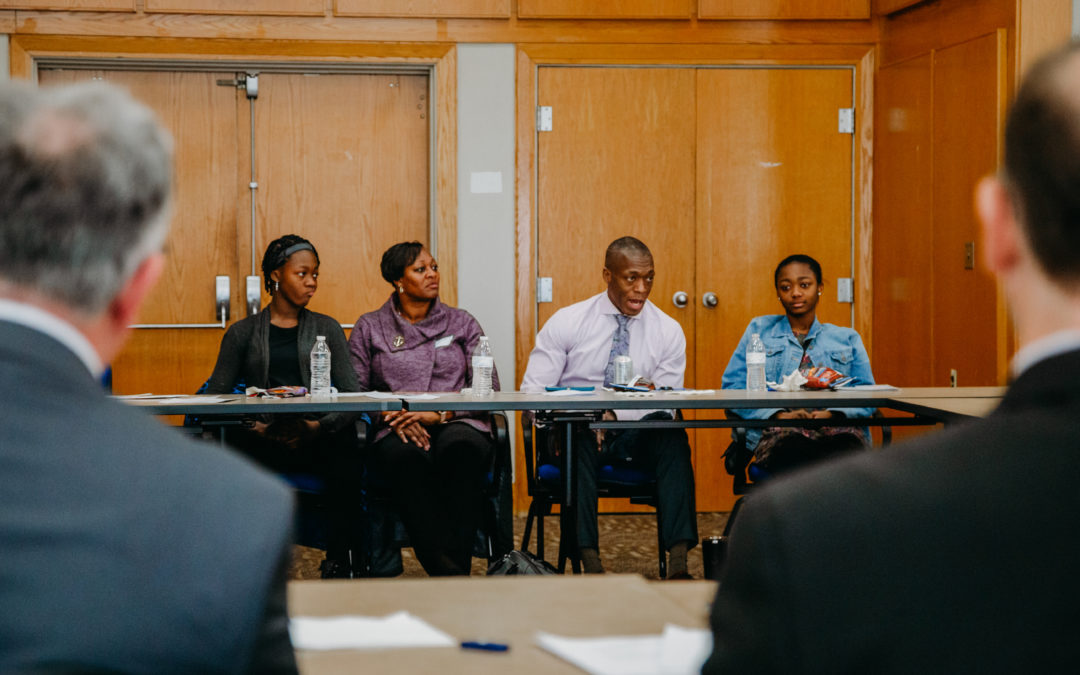 Melvin and Danielle Smith glanced up at the James Monroe Building just before they walked through the doors. The pair headed up to the 22nd floor of Richmond, Virginia’s tallest building with one thing in mind: their two daughters’ education.

High above the Richmond skyline, the Smiths, their two daughters, and a handful of other military families with school-aged children, gathered to meet with military and veteran representatives, education officials, and Virginia’s Secretary of Education.

“When we moved to the Northern Virginia area from Washington State, we weren’t sure how the girls would adjust,” Melvin explained to officials. Luckily, they’ve done well. But what’s concerning is how much we’ve had to step in and speak up for our kids in their new school.”

The Smiths’ youngest daughter, Camryn, a 12-year-old in 7th grade, loved playing soccer at her school in Washington. But her new middle school in Virginia didn’t have one, so she was left taking a drama class instead. Camryn said the new class wasn’t something she’d pick if given the choice.

“I’ve never taken an acting class, but I didn’t get a choice, so I’m going to have to do it!” she said with a smile.

Her older sister faced a bigger challenge. Madisyn, a junior in high school, jumped through hoops at her new school—which didn’t offer many of the same courses she was taking at her old school. She was left having to retake classes, or worse, be placed in classes below her peers simply because Virginia didn’t accept her credits from Washington.

Before they moved to Virginia, the Smiths said they started looking at schools before they even knew where they’d live. And they involved their kids because they felt it was important that they have a say in where they spend their high school years.

Camryn hoped for a soccer team. Madisyn was concerned with credit transferring and test scores. Neither got exactly what they wanted; and neither did dad, Melvin, who now commutes over an hour and a half to work at the Pentagon.

“If a long commute to work means my girls thrive in school, I’m willing to sacrifice,” he said.

All three have done their best to flourish in their new school (and Dad on his new commute). Mom, Danielle, says she is proud of both of her girls’ resiliency.

“What would be great was if there was an even judging criteria across all states, so when a student moved from Washington to Virginia, what is accepted in one state is accepted in another,” Melvin explained. “It’s just not that way.”

The National Military Family Association is teaming up with military families in Virginia, Texas, and Florida to raise awareness of the varying education standards among states. Families will meet with policymakers, education officials, and other leaders to share their child's education struggles, how they’ve been their best advocate, and why military kids—and all kids—deserve high, consistent standards everywhere they move to.

No child’s education should suffer because of a parent’s call to serve. Military life is hard enough. School shouldn’t have to be.

Learn more about the Smith's education journey and hear from more families speaking up for their children.

Has your student experienced issues moving to a new school after a military move? Share your story with us in a comment!