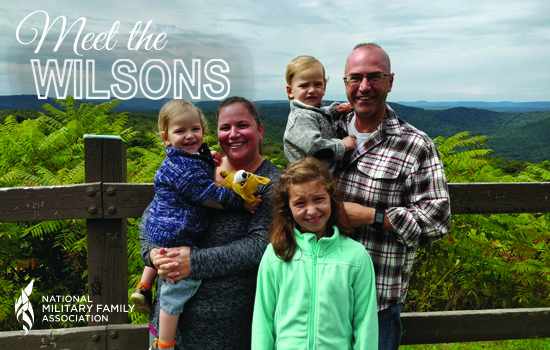 It’s Military Family Appreciation Month, where we focus on the uniqueness, braveness, and total awesomeness of the military family. We know the military journey can be tough, but you’re not alone.

Dave and Rachel met 15 years ago when they were both serving in the Quantico Marine Corps Band. They married in 2006 and finally returned to MCB Quantico two years ago. But a lot has transpired since their last tour there.

After Rachel completed her time in the Marine Corps in 2008, she and Dave had their first child, Leah (9). Switching from the role of Marine to mother had its challenges, but Rachel felt great being able to stay at home with Leah. Just before returning to their old stomping grounds in Northern Virginia in 2015, Rachel and Dave found out they were pregnant again. To say they were surprised is an understatement, as they weren’t planning on having more children at the time.

In fact, Dave had begun contemplating retirement…until they found out they were having twins. “The nurse told us so nonchalantly, like it was just another regular day. I jumped up and screamed ‘WHAT?’ while Dave just started laughing hysterically,” Rachel recalled.

Just four months after moving back to the Quantico area, the Wilson’s sons, Noah and Ryan (2) were born.

“Nothing you do ahead of time will ever prepare you for twins. It’s a whole different ball game, even if you’ve had a child before,” said Rachel. “It was a total disruption to our system. With twins, each evolution from meals to bath time, is such a process. We can’t just fly by the seat of our pants like we did with our daughter.”

The first year was the hardest, Dave and Rachel said. But aside from the fact that there were two newborns instead of one, the Wilsons were also dealing with the added challenge of Dave’s career in the Marine Corps, which had him traveling extensively during the first few months of the babies’ lives.

Rachel and Dave would joke that having twins was just like arriving at Marine Corps boot camp.

“You’re awake for days, and you have absolutely no choice or control over the situation,” said Rachel.

But like many parents, Dave and Rachel approached the ‘twin life’ as a team, which Rachel says was helped them survive that first year and beyond. “He’s a true parenting partner,” Rachel said of Dave. “He got up every two hours in the middle of the night and brought me the babies so I could nurse them, then went to work all day, and came home to do it all again. I think it’s really important to acknowledge that, because as hard as it is to raise twins, it’s a lot easier because of him.”

When military life is added to an equation with multiple children, it can put strain on a relationship. She says it’s important to recognize one another, even with small acts of gratitude.

“Tasks that used to be just normal parts of your day become hurdles when you have twins,” Rachel explained. “Just hearing that you appreciate each other can make the time apart more bearable, as it keeps you connected. Even just a random text when you get your kids to sleep can go a long way.”

And older sister, Leah, is a big helper in the Wilson household. She helps when she can and realizes she’s part of the team, too, which is important when her Dad is gone. Yet, Rachel explained that no one should ever try to go it alone. It’s a team effort, even when the other parent isn’t around.

Her advice for all parents is to try to avoid isolation. “Don’t go it alone. Just don’t. Invite a friend over or ask a family member to come visit. If that’s not an option, as hard as it is, you need to get out of the house every now and then. Go to the store, or just drive,” she said. “It can be exhausting but it can help time move a bit quicker until your support returns!”

Military families, like the Wilsons, share many commonalities, yet are as unique as the stars in the sky. We hope you’ve enjoyed hearing about their journey as we continue to celebrate Military Family Appreciation Month!