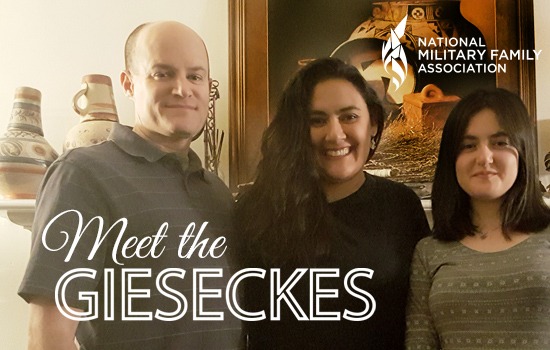 It’s Military Family Appreciation Month, where we focus on the uniqueness, braveness, and total awesomeness of the military family. In our final week of this awesome month, we’d like to introduce you to the Gieseckes, an Army family currently stationed at Fort Belvoir, in Northern Virginia.

Heath, who works with information systems in the Army, and Cynthia are both from Texas, and met when some of their high school friends introduced them at Cynthia’s birthday party. The couple parted ways when she went off to college, but began dating again after she graduated in 2000, and married in 2001, after Heath received his commission.

Cynthia was no stranger to military culture. She grew up in an Army Reserve family.

“I remember how worried my mom was when our father received orders to Grenada,” she said. “Thankfully, his orders were cancelled and he returned home.”

But being married to an active duty soldier proved to be much different than growing up as a Reserve family.

“Our family has moved nine times over the last 16 years,” Cynthia said. “Our biggest challenge as a military family has been not being there for our family in Texas.”

It’s especially difficult for them knowing that their 16 year old daughter, Marina, hasn’t had the chance to grow up like they did—around her grandparents, cousins, and other family.

Cynthia had aspirations to attend law school after she graduated from college, but decided to put that on hold for a while, since they weren’t stationed near any law schools she would be able to attend. Instead, she chose to go back to school for her Master’s degree while Heath was on his second of three deployments in support of Operation Iraqi Freedom and Operation Enduring Freedom. She also began working part-time as a contractor on base to pass the time over the years.

“I’ve held different jobs at each installation we’ve moved to,” she recalled. “I feel I’m a ‘jack of all trades’ because of that!”

Throughout the education and employment challenges that Cynthia and her daughter experienced, and the many moves around the world they’ve made, the Gieseckes have never lost sight of the most important factor in their lives…family.

“Now that we’re closer to retirement, hindsight has shown us that our service member’s career is only temporary, and it, too, shall pass,” Cynthia said. “Family is what’s most important and when we have the chance to spend it with each other, we need to be intentional about it.”

Cynthia believes the best way to be intentional with your time and family is by putting away the gadgets for a bit and focusing on what’s happening right in front of you.

“We have so many friends whose service members have made the ultimate sacrifice,” she said. “What better way to honor them by not taking our own families for granted.”