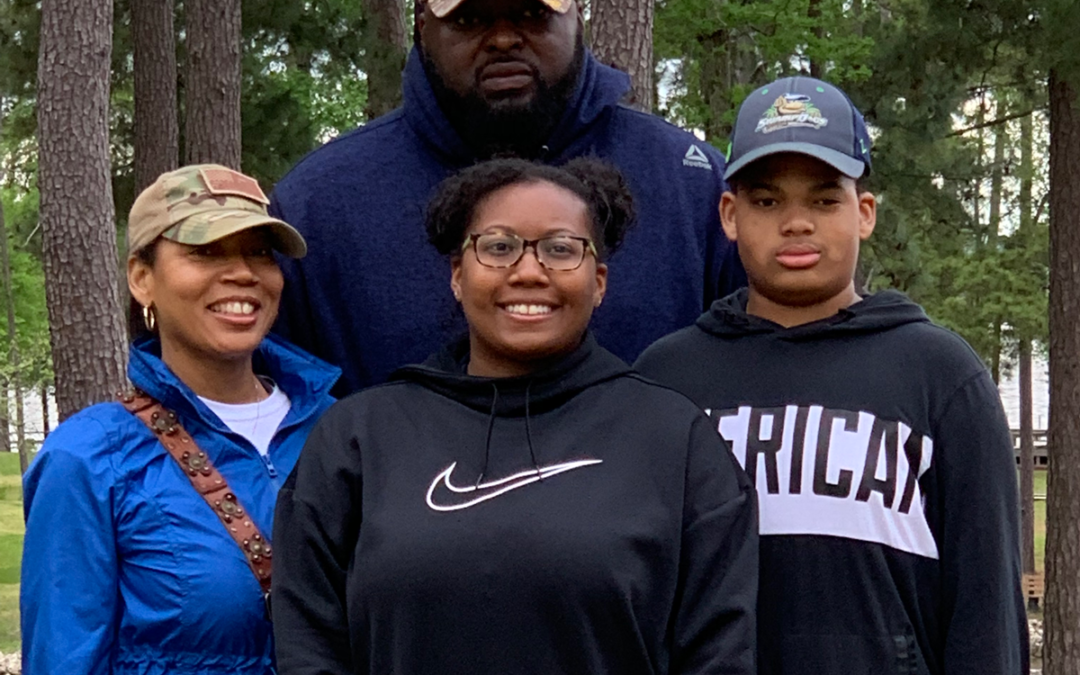 Recently, I had the pleasure of attending an Operation Purple Healing Adventures retreat in Trinty, Texas. YMCA Camp Cullen is a magnificent 530-acre camp located along Lake Livingston. This was the first Healing Adventures that I have attended, and I am beyond grateful for the experience.

NMFA hosted 19 families of the wounded, ill, or injured with activities that included: archery, zip-lining, riflery, arts and crafts, an Alpine climbing Tower, and a bounce pillow for kids. I was amazed meeting these resilient families who all experience different injuries but bonded together through their service to country and desire to make the most of the weekend experience.

One particular family inspired me because of their obvious care and compassion for each other. Robert, who was Army Special Forces, arrived Friday evening with his wife Garnett, daughter Chelsea, and son Reginal, and quickly I learned Robert was a wounded veteran dealing with multiple severe injuries. Garnett encompassed everything a caregiver would be and more; she told more how she fights for Robert and works to “keep going” for the children. While Robert was determined to participate in every activity, Garnett would be right there next to him worried the toll the physical exertion would have later. Garnett explained Robert is often up most nights in pain, but that he never talks about the amount of pain he is truly in.

One of my favorite moments was at the archery range. Garnett expressed her concern for Robert and his injuries, but he didn't care. Robert wanted to stand next to his son and shoot arrows at targets, despite how sore he might feel later! While standing at the archery site, Robert and another wounded veterans bonded over their injuries, sharing where in their bodies they had metal replacing bone or muscle.

Throughout the weekend, Garnett would pull me aside to thank me for the experience, she explained the family doesn’t take many trips due to Robert’s injuries. Garnett pointed out that Robert could never go to an amusement park with the loud noises, walking, and roller coasters.

When the Healing Adventures retreat was over, Garnett shared with us, “Thank you for the amazing experience. Our family enjoyed our time together and we were able to make new friendships. The fellowship with other veterans, caregivers, and families was something we are not able to do, and we didn’t realize how much it would help. I saw growth in myself, my husband and our children in one weekend. I cannot express all the gratitude I have-Thank you!”

NMFA is especially grateful to the USAA Foundation, whose generous donation made this retreat a possibility.