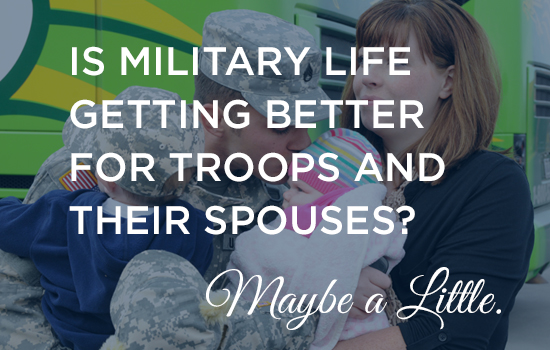 The overall satisfaction, finances and marriages of our troops are generally better off now than during the height of the wars, according to Department of Defense survey findings released last week.

“It’s encouraging to see from the survey data that troops and their spouses report fewer financial problems and greater satisfaction with military life than in recent surveys,” NMFA Executive Director Joyce Raezer said. “Some issues, especially the military spouse unemployment rate, remain troubling. We hope DoD will intensify its efforts to address problem areas and target additional support where the survey findings indicate help is needed.”

According to DoD, the survey findings show overall improvement, but there are still vulnerable populations. The plan is to use the research to evaluate the effectiveness of military programs—like MyCAA and Military One Source—and improve spouse employment, relationship management, and troop and family satisfaction.

Were you surveyed? Are you feeling better off than in the past? Tell us more in the comments section below.