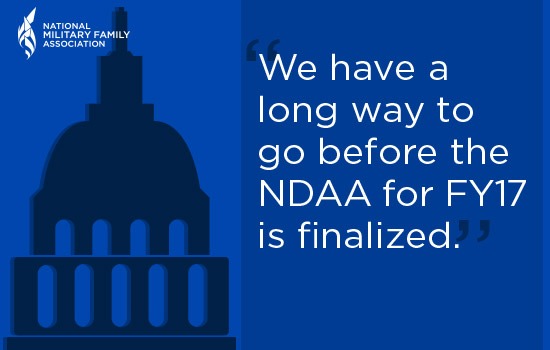 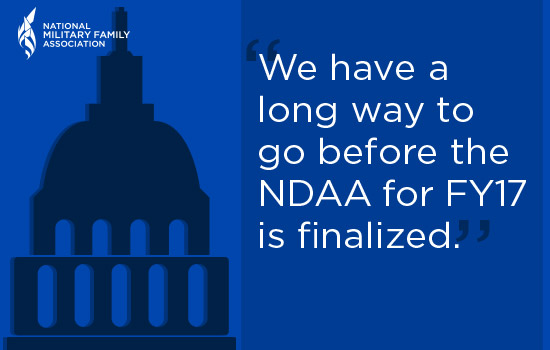 It’s an annual Washington ritual: waiting to see what will be included in the year’s National Defense Authorization Act (NDAA), the legislation that sets policies and authorizes funding for the Department of Defense (DoD). The Administration released its budget request in February; now the ball is in Congress’ court. The legislation needs to pass through both houses of Congress and go to the President for his signature before becoming law.

While we’re still waiting for the details of the Senate plan, we’ve had a chance to analyze the bill, or mark, passed by the House Armed Services Committee (HASC). A large portion of the bill focuses on the HASC’s vision for health care reform, but the massive bill also contains many other provisions important to military families’ quality of life.

What should military families know about the HASC mark?

Pay: The HASC bill rejects the Administration’s proposal for a 1.6% pay increase for service members in favor of a 2.1% raise. This would be consistent with the Employment Cost Index (ECI), which measures the cost of labor in the market and is traditionally used as the benchmark for calculating military pay. If the Administration’s proposal passes it will be the fourth year in a row that military pay increases are set below ECI.

We are very concerned about the impact these changes would have on the savings and quality families rely on when shopping at the commissary. We are urging Congress to move cautiously and study the possible effects of altering commissary operations before making sweeping changes. Military families cannot afford the risk that their commissary savings will be reduced or lost.

Survivors: The HASC extended the Special Survivor Indemnity Allowance (SSIA) for one year at the current rate of $310 per month. The SSIA was created in the FY08 NDAA as a first step in a longer-term effort to phase out the Dependency and Indemnity Compensation (DIC) offset to the Survivor Benefit Plan (SBP). The authority to pay the SSIA is set to expire on March 1, 2016.

The HASC moved to eliminate differential treatment under the Survivor Benefit Plan (SBP) between members of the Reserve Component who die from an injury/illness in the line of duty during Inactive-Duty training (IDT) and active duty service members who die in the line of duty.

Expanded Parental Leave: We were pleased to see the Armed Services committee recognize the importance of parental leave and expand leave for service members whose spouses give birth as well as for dual-service couples who adopt a child. Under the HASC bill, new parents will receive up to 14 days of leave when their spouse gives birth, up from 10 days currently allowed in law. Dual-service couples who adopt a child will be allowed 36 days of leave to be divided between the two parents. DoD expanded maternity leave for female service members who give birth to 12 weeks earlier this year; we’re happy to see the needs of fathers and adoptive parents addressed as well.

WIC Offices on Base: The Armed Services committee voted to approve a provision that would allow installation commanders to provide space for Women, Infants and Children (WIC) offices rent-free. WIC is a nutrition assistance program supporting pregnant moms and families with children under age five. Many military families rely on WIC to help them provide healthy food for their babies and young children. We’re pleased the House recognized military families need easy, convenient access to this vital program.

The bill will be sent to the full House for consideration. Meanwhile, the Senate Armed Services Committee (SASC) also completed their mark of the NDAA for FY17. Stay tuned for future articles comparing the House and Senate provisions.

Remember, we have a long way to go before the NDAA for FY17 is finalized. Both the House and Senate versions will be reviewed in conference and final details negotiated. Now is your chance to weigh-in. What do you think about the HASC mark?