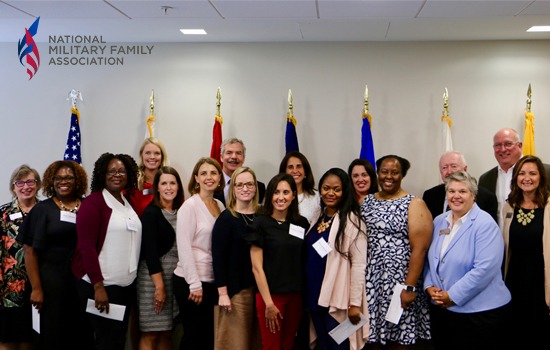 Chasing Passions and Finding Their Purpose, Thanks to Fisher House Foundation

Chasing Passions and Finding Their Purpose, Thanks to Fisher House Foundation

“To impact the quality of life within a military family, you have to look to the military spouses.”
-Fisher House Foundation President Dave Coker

Fisher House Foundation has been a staunch supporter of military families for years, donating more than $1.5 million to NMFA’s Military Spouse Scholarship Program. This week, NMFA and Fisher House welcomed scholarship recipients to share their stories at a luncheon celebrating their goals and career pursuits.

In 2017, the unemployment rate for military spouses hit 23%, nearly three times the national average.  At NMFA, we know the struggles military spouses have to overcome when trying to balance a purpose-driven career; something the military doesn’t always accommodate. The highly-mobile military lifestyle often disrupts a military spouse’s education or career because of frequent moves, having to live in remote locations, limited childcare options, and other challenges.

Army wife Abeni Johnson plans to use her funding to get a Master’s Degree in International Special Education, a degree she says was inspired by three years teaching elementary school in Abidjan, Cote d’Ivoire, West Africa.

“I discovered that this school did not have the resources and specialized support for students that had learning disabilities and physical disabilities,” Abeni shared. “I have finally found my purpose outside of my home, and I would like to be successful in this program so that I can provide the needed services to students around the world.”

Anna Ghen, a military spouse who studied pharmacology in school, will use her scholarship from NMFA and Fisher House Foundation to fund her real estate training, a field she found herself in after not being able to find work in pharmacology near her husband’s previous duty stations. She started her own realty business 18 months ago and is now preparing for her family’s next PCS.

“I know that with every move, someone has to make a sacrifice,” Anna explained. “I know I’ll have to rebuild my business each time we move.” Trying to balance it all has been overwhelming at times for Anna. “The general public either doesn’t know or doesn’t understand. You have to have flexibility and without a support system it is nearly impossible.”

The Fisher House Foundation recognizes the sacrifices made by military spouses determined to make their career and education goals a reality.

“Our investment in you is not just for today,” Coker told the spouses. “It’s for five, ten years down the road—for the future.”

Because of the success of NMFA’s partnership with Fisher House Foundation, many more military spouses, like Abeni and Anna, will have the opportunity to chase their passions, find their purpose, and create an extraordinary quality of life for their own military families.

Thank you, Fisher House Foundation, for helping to makes these military spouse dreams a reality!