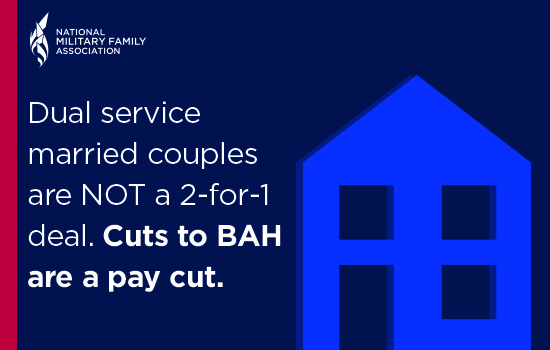 Recently, the Senate passed its version of the National Defense Authorization Act (NDAA), the massive piece of legislation that sets policies and funding levels for the Department of Defense (DoD). Tucked away in the 1600-page bill is a set of proposals that — if signed into law — will significantly change the way service members receive their Basic Allowance for Housing (BAH).

And here’s what we think you need to know about it:

We’re not okay with this proposal. At all.

If passed, this proposal would lead to a sizable pay cut for many service members and their families. By itself, that pay cut would be more than enough reason for us to oppose the legislation. However, we believe changing BAH as the Senate suggests unfairly penalizes married service members, places an undue administrative burden on DoD, and discourages responsible financial choices.

Unfair Marriage Penalty: Proponents of the Senate plan argue that since BAH is meant to pay for housing, it is appropriate to reduce the amount paid to dual service married couples who reside together. They only need one house, right? That argument fails to take into account that BAH has long been considered part of Regular Military Compensation (RMC), the figure used to calculate how military pay stacks up against salaries in the civilian world. Reducing a service member’s BAH lowers his or her RMC. Simply put, it’s a pay cut.

Dual service married couples are not a two-for-one deal. Each of them serves and sacrifices, and deserves to be compensated accordingly. Anything else unfairly penalizes service members who marry other military members.

Administrative Nightmare: The Senate proposal is very similar to the current policy for military families living overseas, who are reimbursed for their actual housing costs when living off base. The overseas process works the way it does because of the differences in U.S. and overseas housing markets and currency fluctuations. But this only affects a relatively small number of families. Imagine the organization needed to check every service member’s rental agreement, or mortgage statement, and set their pay accordingly. What about the financial impact on families when mistakes inevitably happen? The time, effort, and money required to institute such a plan would far outweigh any potential savings.

Discouraging Responsible Choices: The Senate plan severely limits military families’ freedom to make responsible choices and manage their own money. The majority of military families use all of their BAH to pay for their housing and utilities; in fact, many families tell us their housing costs exceed BAH. However, the current system allows families flexibility to make different choices based on their unique needs. The Senate plan would incentivize families to spend all of their BAH on housing and not a penny less. How would that inflexibility help military families – or the DoD’s bottom line? And what’s more shocking: the plan penalizes junior service members who make the responsible choice to seek out roommates in order to save money.

The Senate proposals regarding BAH were not included in the version passed by the House, which means it is an issue to be resolved in conference. There is still time to let your Congressman or Senator know how this change would affect your military family.

How does your family use BAH? Does it cover ALL of your rent and utilities? We’ll be speaking out loud and clear to let Congress know any changes to BAH must keep your family’s needs in mind. Your service member’s sacrifice demands nothing less.

Please share your thoughtful, specific examples below and we’ll be sure to capture your comments in your response to Congress.