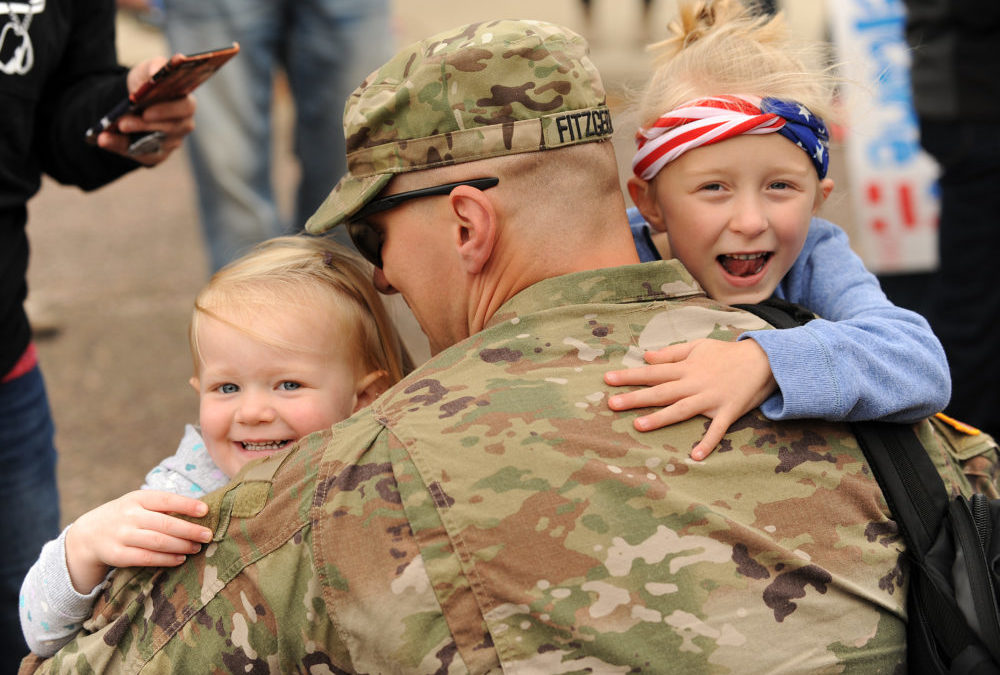 About 5 years ago, this month, we were packing up for our first PCS in the Army Active Guard and Reserve (AGR) program. My husband had been in the Reserves for several years at that point and was itching to go active duty. Well, the problem was going active duty from the reserves was easier said than done, so we decided AGR would be a good way to get his foot in the active duty door.

Being an AGR family means your soldier is a reserve or National Guard soldier who is active duty. Now, being active duty as a reserve soldier doesn’t automatically mean an overseas deployment. While most reserve soldiers have civilian jobs to pay the bills, AGR soldiers work full-time for the Army (or other branch) on top of drilling with the rest of the soldiers at that particular unit. AGR soldiers, along with civilian and Department of Defense employees are the people that keep things functioning on a day-to-day basis at reserve units throughout the country.

Though, we are still fairly new to the AGR lifestyle—only having PCSed 3 times—I have learned a few things along the way I wish active duty families knew about us:

It’s not all butterflies and rainbows. We were at Fort Leonard Wood, Missouri, an active duty Army post, for our last tour. Living on an active duty post, most assume you are regular Army and not a reserve soldier. When it came out that we were AGR, we received comments like, “You’ve got the dream gig! Coming in and leaving when you feel like it and taking as long as you want for lunch!”, “Must be nice not to have to wear your uniform every day,” or “I bet it’s nice not having to move around so much.”

These statements could not be farther from the truth. My husband leaves for work at 0715 and usually does not return home until about 1800. Even then, he brings his work computer home and continues working after the kids are in bed. He typically works through his lunch breaks and the only day he doesn’t wear his uniform is the Monday after a Battle Assembly weekend (a.k.a. drill). And as for the moving around comment

We move around just as often, if not more frequently, than our active duty counterparts. A typical AGR tour is around 3 years. A deployment could make that longer. Some might even get lucky and have their tour extended (but from my understanding, that’s pretty rare). If your soldier is an officer, you’re looking at a PCS every 2 years, and sometimes more frequently. The need for full-time soldiers fluctuates in the reserves, whereas all regular army units are full-time.

We will more than likely NEVER be stationed at amazing overseas locations, like Germany or Japan. As much as we want it and as amazing as it would be, Germany will likely never happen for us. There are a few AGR positions overseas, but not many.

When we PCS, we typically do not move from post to post. When you live on post, everyone knows you’re affiliated with the military. Even when you go off-post into the community, people ask what you or your spouse does for a living and you say he’s in the Army, they don’t give it a second thought. As an AGR family, it’s never that simple. I’ve gotten responses like, “Are you sure he’s active duty?”, and “Here? Is there a military installation here?” I’ve gotten the “Are you sure he’s active duty?” question so many times I want to scream every time I hear it!

AGR soldiers promote slower than if they were on active duty. I will never understand it, but that’s the way it is. You have amazing officers who are a year and a half behind others who have the same date of rank, simply because they decided not to go active duty.

Resources, though abundant, are not as easy to find. Moving to a large Army post, I was impressed by all of the resources I came across on a daily basis. From MWR events to the lending closet. From ACS to the FRG. Fun runs, spouse groups, the fitness and childcare centers on post, child and youth activities and classes. The list goes on and on! When you’re a military family moving into a community that’s mostly civilian you have to do A LOT more research to find resources applicable to you because the military community just isn’t as visible.

In my opinion, AGR soldiers and their families are stuck in a sort of gray zone. I sometimes feel like the people of Whoville in Horton Hears a Who yelling, “WE ARE HERE! WE ARE HERE! WE ARE HERE!” We aren’t quite active duty and we aren’t quite reserves. We experience the best and worst of both worlds. Everyone has their own opinion of whether being AGR is worth it, but just like any other job, somebody has to do it.

Is your family part of the Active Guard and Reserves? What would you add to the list?